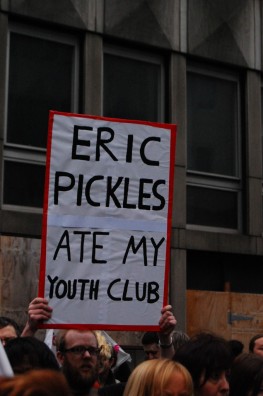 The Conservative-Liberal Democrat coalition government has been radically transforming local government. Many changes have not been for the better.

The Tory-led government has decimated local government funding. They have vigorously pushed their free schools and academies agenda, moving an increasing number of schools out of local education authority control. Ministers have vilified any cash strapped councils that consider raising council tax or altering bin collections.

Proposed changes to planning legislation undermine Councils and fly in the face of the Localism Act.  Tory MPs have been depicting local government as obstructive and wasteful. Councils are portrayed as NIMBYs blocking economic growth when they raise objections to plans to sell-off forests or school playing fields or plans to build on the greenbelt.

So much for localism. Given the relentless attacks on local Councils, it is no wonder many Tory Councillors dislike Grant Shapps, Eric Pickles and Michael Gove even more than we do!

Shamefully though, it is local authorities in some of the country’s poorest regions that are being hardest hit by central government cuts. These councils are predominantly controlled by Labour. This Tory-led government cut the tax of the countries top earners while increasing council tax for the very poorest. This says it all really.

Politics is for everyone and local politicians should reflect the communities they represent. Without modest allowances, local politics would become even less diverse than it is now. Perhaps this is a hard thing for the cabinet of predominately white, male, millionaires to grasp.

I can see where he was coming from but he’s totally wrong. Being a Councillor is brilliant. Even now. We must beware negativity and fatalism. Local government still has the power to change people’s lives. In tough times, with the huge reduction in central government funding, Councils can still make a dramatically difference to their local communities.

There are many, many ways Councillors can radically improve the communities they serve. We can champion progressive planning policies that prioritise delivering more affordable family housing. We can ask that new developments employ local people as apprentices. We can use the section 106 money from developments to fund community projects and urban regeneration. We can use licensing to tackle obesity, alcoholism and anti-social behaviour. Our licensing team can work with trading standards to tackling rogue landlords. We can use our public health brief to address health inequalities and hold Clinical Commissioning Groups to account. Through progressive energy policies we can work to alleviate fuel poverty and lower our carbon emissions. We can lead by example and pay all our workers the living wage. We can insist all our contractors do the same. We can do so much. Local government leaders probably have more impact and influence than many backbench MPs.

Difficult decisions need to be made. Councils must set legal and responsible budgets. But Labour Councils can show they are much more than just a dented shield by enacting policies with fairness and social justice at their heart.

For many voters, particularly in areas with high levels of deprivation, the choice is not between voting Labour, Conservative or Liberal Democrat, the choice is whether or not to bother voting at all. What is the point if all politicians are the same? We need to demonstrate the real different we make in local government. We need to inspire our communities to come out and vote for us. We need to show them we are on their side.

If we fail, we can’t expect our voters to support us. If we succeed, and combine progressive local policies with positive campaigning, we’ll be on track to win the 2015 general election and build a better future for all.