Last week I attended the Labour Party Conference in Manchester. I arrived early on Saturday to take part in a training session for some of our fantastic new councillors in the North West. During the conference I met Ed Miliband’s office to discuss my priorities on the NEC. These are:

On Tuesday 23 September Labour’s National Executive Committee held a brief meeting to welcome new members and thank people leaving the NEC. I have also been invited to join the Association of Labour Councillors Executive and look forward to attending their next meeting in December. I will report back after full NEC and ALC meetings.

The conference was held shortly after the independence referendum in Scotland, where many attendees had been campaigning extremely hard. Johanna Baxter made a particularly moving speech about the referendum. Devolution was a hot topic and there was a strong consensus in favour of power and decision making being taken from Westminster and given to local government. There were also interesting discussions about what the Scottish referendum meant for the Labour party in England and the importance of taking ownership of a positive, inclusive sense of English national identity.

It was great meeting councillors from all over the country including many of our newly elected councillors. There are now over 7,000 Labour councillors and we had some great successes in May’s elections. I particularly enjoyed hearing about how David Cameron’s favourite Tory Council Hammersmith and Fulham suffered a shock defeat to Labour. (The Hammersmith and Fulham team proudly received a conference award for their excellent campaign.)

I also helped to staff the Free School Meals stand. London Assembly member Fiona Twycross and I led the negotiations on Free School Meals at July’s National Policy Forum. This policy is core to our Labour values and was pioneered by Councils in Hull, Islington, Southwark, Durham and Newham. It was brilliant seeing so many people stopping by the stand to show their support. 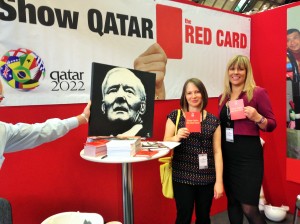 Another highlight for me was sharing a platform at a fringe event with Councillor Lachlan Morrison who spoke brilliantly about UCATT’s campaign defending worker’s rights in Qatar. As a football fan I am totally appalled that by the time Qatar host the World Cup over 4,000 construction workers will have died while working there. I fully support UCATT’s campaign to “Show FIFA the Red Card.”

Finally, I am really glad that before I left Manchester I had a chance to visit Oldham with Council Leader and fellow  Local Government NEC rep Jim McMahon. I was really impressed with the scale of Oldham Council’s vision for their community. The work Jim and others are doing to transform the local community demonstrates the amazing, positive impact local government can have.