I gave the following speech to the 2015 Labour Party Conference:

Our lives our defined by our work, the communities we come from and our most strongly held values and beliefs. Our lives are defied by the people and places we love. The Stronger, Safer Policy commission covers the issues at the heart of what matters to us most.

May’s General Election defeat was devastating. Some of us still feel in shock at the prospect of what another five year’s of a Conservative Government means for our communities.

Labour’s general election defeat has been particularly hard for all of us in local government. Councils have had their funding cut dramatically since the Tories came to power in 2010. These reckless cuts to Council budgets endanger vital public services. We must come together as a Labour movement to oppose them.

Together we continue to champion policies that make a real difference to people, policies like:

If people want to know why they should vote Labour, they should look at what we are doing in local government. 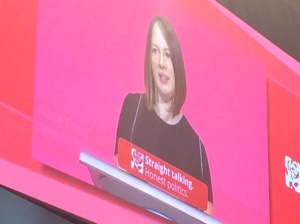 Remember when David Cameron forgot what football team he is supposed to pretend to support? David Cameron doesn’t really get football, he just doesn’t understand.

Labour, however recognise that football clubs are not businesses, instead they belong to their communities. They are an important part of many people’s cultural identity and sense of belonging.

But despite football club’s importance in the lives of their members and supporters, too often there are no effective means for fans to have a say in how their clubs are run. Labour’s 2015 manifesto planned to introduce legislation to enable accredited supporters trusts to appoint and remove at least two of the directors of a football club and to purchase shares when the club changes hands.

The principal of supporters on the boards of football clubs reflects our wider values and should also pave the way for places for workers on the boards of companies. The plans were symbolic of the wider narrative – that the Labour Party is prepared to take power away from a self-interested elite and this give power back to our communities.

We know the next five years are going to be incredibly tough. Unless something very dramatic happens we are out of national government until 2020. But despite massive, unfair cuts from the Tory government, that hit the most deprived areas hardest, Labour Councils still deliver. We run many of the UK’s major cities, towns and regions. In many areas Labour’s Councillors are the last line of defend against this Tory government. There are many, vital local elections between now and 2020. Our 7,000 Councillors are leading the Labour fightback.

2 thoughts on “Our 7,000 Councillors are leading the Labour fightback”