The NEC congratulated Jeremy Corbyn on his re-election as Labour Leader. Leadership elections are resource intensive and tiring for everyone. While there are always lessons to be learned on how any process like this is administered, we look forward to moving on, uniting behind Jeremy and campaigning on the issues that matter most to our communities. Preparing for a possible snap General Election is now also a top priority.

The NEC unanimously agreed Jeremy Corbyn’s 10 policy pledges on topics like health, housing, education, protecting the environment and building a stronger economy and fairer society. You can read the full text online. Labour’s National Policy Forum will now consider how these pledges can be delivered, costed and form a General Election manifesto.

The NEC meeting on 20 September agreed a package of rule changes that were put to the 2016 Labour Party Conference. All but one rule change was unanimously agreed. There was a disagreement about the implementation of the one aspect of a rule changes in the devolution section. Everyone on the NEC supported giving Scottish and Welsh Labour more power, influence and autonomy. Currently the Leader of the Scottish and Welsh Labour Parties are able to attend NEC meetings but do not have full voting rights. 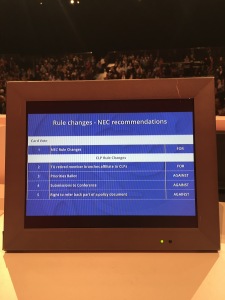 The new plans grant the Leaders (or someone they appoint from their front bench) full NEC membership and voting rights. This is a longstanding issue that for many years Scottish and Welsh Labour have campaigned for. In Scotland and Wales it is not viewed as a left/right issue. While Labour is in government Wales, we face enormous challenges in Scotland rebuilding the party and winning back trust. These new powers should help this important work and demonstrate how seriously we take winning back Scotland and supporting our government in Wales.

We also agreed to give more powers to Labour Women’s Conference, a change lead by Ann Black, Chair of the Gender Representation Party Reform work. This was welcomed across the party as an important step forward.

Last November, Labour started a process to reform our structures so we better reflect and represent our local communities. Key areas identified for improvement were increasing support for Councillors, responding

to devolution and doing more to ensure our MPs, Councillors, PPC and Mayors reflect the diversity of the communities they represent.

Tom Watson and I wrote to Labour Councillors outlining our local government proposals, which were agreed by Labour Party Conference. These included:

We are delighted to have achieved these recommendations to make our processes and procedures fairer and more transparent, increase diversity and better support Councillors. A massive thank you to the thousands of Councillors over the past year who contributed to the consultation and final report, and an equally big thank you to Tom, Jeremy and the NEC for listening!

Each year Conference votes on which topics to debate and pass motions on. This year delegates chose not to prioritise discussing Brexit. However, a motion was passed on Employment Rights that included a line calling on Labour to demand that the outcome of the negotiations be put to the British people, possibly via a General Election or by Referendum.

Subsequently, the NEC issued this clarification: “Conference policy on Brexit has been misinterpreted in some reports as committing Labour to a second referendum on UK membership for the EU, so for the avoidance of doubt we want to make clear that it is not our policy. We have called for the government to be transparent and inclusive in their process and to respect rights at work and other protections that the EU provided. Those issues will be our focus in holding the Tory government to account.”

June’s EU Referendum is one of the most significant political events of the last 50 years. I look forward to discussing Labour’s response to Brexit at the NEC Away-day in November.

The final of the three NEC meetings of Conference saw new members join the committee and elected a new Chair. We welcomed two new CLP reps, a new PLP rep and Nick Forbes as the new Local Government Rep. We also said an emotional goodbye to the outgoing members, who had contributed decades of service to Labour.

Glenis Willmott MEP, Leader of the European Parliamentary Labour Party, was elected Chair of the NEC. Her experience will be extremely valuable as she moves the NEC forward, as well as maintaining strong relationships with key allies in the European Parliament as we seek to influence the Brexit negotiations. Deputy General Secretary of the CWU Andy Kerr was elected Vice-Chair of the NEC. Both Andy and Glenis will work tirelessly to unite the party and take the fight to the Tories, SNP and our other political opponents.

Get in touch if you have any questions

Please get in touch if you have any questions. You can read my NEC reports from previous meetings at https://aliceperry.wordpress.com/nec/ and sign-up to my mailing list. (I have officially begun my second term as an NEC member. I do hope it’s less eventful than my first term!)