Labour may be out of government in Westminster, but we are in power in Wales, and in hundreds of towns and cities throughout the UK. Every day, our councillors in both Labour run authorities and in opposition, fly the flag for Labour values and make a meaningful difference to our local communities.

Being a councillor is a lot of work, but is extremely rewarding. It is an honour to be elected to stand up for your community. And it is important that our elected representatives mirror the diversity and experiences of the communities we come from.

There is lots we have been doing as a party, and more we can do, to encourage more people to get involved and stand to be councillors. This includes supporting more women, BAME candidates, people from working class backgrounds, LGBT and disabled people to stand for election.

END_OF_DOCUMENT_TOKEN_TO_BE_REPLACED

This week’s Labourlist poll asked if all women shortlists should be used more in local government selections. Numerous recent reports have highlighted the urgent need to increase female representation in local government overall and in leadership positions.

Jeremy Corbyn committed to a gender balanced parliamentary Labour Party and supported plans to increase women’s representation at all levels of the party, including local government. To this end, the 2016 Labour Party Conference agreed a a number of important changes to rules and procedures. One was the phase out all male wards and the other was to extend the use of all women shortlists in Council selections.

According to Labour Party rules, if members are selecting candidates three positions to represent a Council ward, at least one of these candidates should be female. For various reasons, in a minority of cases this rule hasn’t always been strictly enforced. The result has been a small number Council wards where all of the Labour candidates are male. Last year’s conference and this year’s NEC Equalities Committee agreed that this practice should end. It was particularly noted that the NEC did not want to see any all male wards standing for election in the 2018 London council elections.

Last year’s conference also clarified rules about extending the use of AWS for council selections. While a least one of three Council candidates in a ward of three must be female, local parties can also chose to increase this to help them reach a gender balanced Council.  END_OF_DOCUMENT_TOKEN_TO_BE_REPLACED

The NEC congratulated Jeremy Corbyn on his re-election as Labour Leader. Leadership elections are resource intensive and tiring for everyone. While there are always lessons to be learned on how any process like this is administered, we look forward to moving on, uniting behind Jeremy and campaigning on the issues that matter most to our communities. Preparing for a possible snap General Election is now also a top priority.

The NEC unanimously agreed Jeremy Corbyn’s 10 policy pledges on topics like health, housing, education, protecting the environment and building a stronger economy and fairer society. You can read the full text online. Labour’s National Policy Forum will now consider how these pledges can be delivered, costed and form a General Election manifesto.

The NEC meeting on 20 September agreed a package of rule changes that were put to the 2016 Labour Party Conference. All but one rule change was unanimously agreed. There was a disagreement about the implementation of the one aspect of a rule changes in the devolution section. Everyone on the NEC supported giving Scottish and Welsh Labour more power, influence and autonomy. Currently the Leader of the Scottish and Welsh Labour Parties are able to attend NEC meetings but do not have full voting rights. 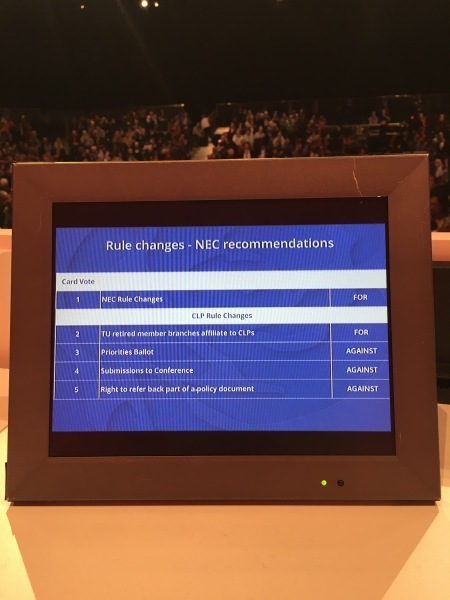 The new plans grant the Leaders (or someone they appoint from their front bench) full NEC membership and voting rights. This is a longstanding issue that for many years Scottish and Welsh Labour have campaigned for. In Scotland and Wales it is not viewed as a left/right issue. While Labour is in government Wales, we face enormous challenges in Scotland rebuilding the party and winning back trust. These new powers should help this important work and demonstrate how seriously we take winning back Scotland and supporting our government in Wales.

We also agreed to give more powers to Labour Women’s Conference, a change lead by Ann Black, Chair of the Gender Representation Party Reform work. This was welcomed across the party as an important step forward.

Last November, Labour started a process to reform our structures so we better reflect and represent our local communities. END_OF_DOCUMENT_TOKEN_TO_BE_REPLACED 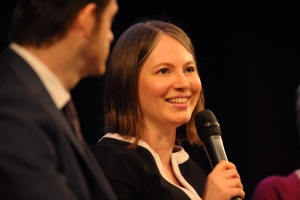 Labour’s National Executive Committee is reviewing how we can improve campaigning, communications and engagement through digital technology and party reform. Party reform covers a number of important areas including reforming local and national party structures, improving equality and diversity of representation, reviewing the our policy making, campaigning and organising, providing greater support for Councillors and responding to the devolution agenda.

This is a challenging time for local government. The Tory government continues to make massive cuts to Council budgets. It is important that Labour is vocal in opposing these disgraceful, damaging Tory cuts, while at the same time emphasising about the amazing, positive difference Labour Councillors make to our communities. Throughout the UK our Councillors demonstrate the difference voting Labour makes. Councillors are proud of our role in the Labour Party and everything we contribute, particularly our contributions to election campaigning and the Party’s finances. Our 7,000 Labour Councillors are leading the electoral fightback. It is important that within the Party we get the respect we deserve.

The support for Councillors strand recognises the vital role Councillors play. Key issues to address include looking at how local government can work more effectively with the Shadow Cabinet and MPs, improving training and development opportunities, using Councillors and local government leaders more in national media, ensuring Councillors are well resourced to fight elections and are able tailor campaign messages and materials to their local audiences, ensuring accountability for ALC subs, reviewing how Councillors are represented within the party on bodies like the NEC, NPF, CAC, regional boards and so on, reviewing the effectiveness of LCFs, reviewing Councillor selection processes, and how the party supports Labour Groups, from ensuring they have access to local membership lists to giving Groups supporting nomination rights in Labour Leadership and Deputy Leadership elections. END_OF_DOCUMENT_TOKEN_TO_BE_REPLACED

In May 2015 Labour suffered the worst general election defeat in a generation. Interim Leader Harriet Harman MP established a Taskforce, Chaired by Dame Margaret Beckett MP, to look into what went wrong and what lessons we can learn for the future. The final report was published yesterday:

As the Local Government representative on the Taskforce I would like to say a massive thank you to the thousands of Councillors and local representatives who contributed.

The Labour Party NEC held its annual away day to discuss future strategy, aims and objectives.

Labour Party membership is now at over 370,000. There has been a huge increase in membership since May’s elections. The new members are more gender balanced and younger than the party’s existing membership base. New members have been surveyed about their interests and reasons for joining, which includes wanting to contribute to policy making, meeting MPs and the Shadow Cabinet, wanting to make a positive difference nationally and locally, helping Labour win elections and meeting like-minded people. New member events have been taking place around the country, with thought being put into how we can better use new and existing members’ different skills and talents, and how we can better engage and support members. Labour wants communication with members to be two-way and are looking at ways to use social media and new technology to facilitate discussions. The success of sourcing questions for PMQs from members was noted. The NEC discussed some of the challenges the dramatic increase in membership has brought, including the additional resources needed to support Constituency Labour Parties (CLPs) and our volunteer CLP Officers. More training and support will be made available to CLPs and members.

A key priority for the party is ensuring Labour’s policy making process is as inclusive as possible. We also discussed how improving digital and online engagement could allow members to engage more in meaningful policy discussions. Current, short-term policy priorities for the Leader’s Office and Shadow Cabinet are changes to tax credits, the British steel industry, responding to the Comprehensive Spending Review and a review of strategic defence and security. A number of policy reviews were announced at Labour Party Conference in September, including defence and security, the economy, housing and home ownership, mental health and access to arts. Labour is at the very early stages of long-term policy development for our 2020 manifesto. Policies for Labour’s 2020 manifesto should be forward looking and relevant to Britain as it will be in 2020 and beyond.

The Labour Party is now debt free (excluding mortgages). This in itself is fantastic news. Unfortunately if the Trade Union Bill passes this will have very serious financial implications for the Labour Party. The Trade Union Bill is totally disgraceful for many, many reasons, including the way it seeks to silence and bankrupt the government’s political opponents. The NEC discussed future fundraising strategies and recognised the excellent work of the party’s digital team in raising millions of pounds from online, micro-donations. The surge in membership also helps the Labour Party’s finances. I highlighted the amount of money Labour Councillors contribute to the party and the importance of communicating to Councillors how this money is spent and the transformative, difference it makes. END_OF_DOCUMENT_TOKEN_TO_BE_REPLACED

I gave the following speech to the 2015 Labour Party Conference:

Our lives our defined by our work, the communities we come from and our most strongly held values and beliefs. Our lives are defied by the people and places we love. The Stronger, Safer Policy commission covers the issues at the heart of what matters to us most.

May’s General Election defeat was devastating. Some of us still feel in shock at the prospect of what another five year’s of a Conservative Government means for our communities.

Labour’s general election defeat has been particularly hard for all of us in local government. Councils have had their funding cut dramatically since the Tories came to power in 2010. These reckless cuts to Council budgets endanger vital public services. We must come together as a Labour movement to oppose them.

But despite the massive cuts to our budgets, Labour Councillors continue to make a huge positive difference to our communities. END_OF_DOCUMENT_TOKEN_TO_BE_REPLACED